skip to main | skip to sidebar

If you have lots of programs running, there's a nice looking screen shown after you've chosen to restart or shutdown. It lists the programs that are still open, and they fall off the list as they close down. You can choose to cancel or to force the action. It seems like a more graceful way than in XP where you can be waiting minutes for it to notice if programs are holding up the shutdown. 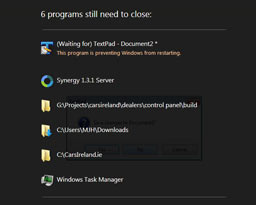 The only problem for me is Textpad always has an unsaved doc that I've forgotten about, and I have to cancel the shutdown in order to get back to Textpad and choose what to save or discard. Then I have to initiate the shutdown again. In XP I could always switch back to Textpad to close it, and shutdown would still be in progress.
Posted by Michael Hinds at 2:42 PM No comments:

Almost as soon as I'd installed Win 7 RC in a vmware, and saw that it was good, I reckoned it was time to give it a go as my main OS. The main reason I have for upgrading is for performance and it was obvious that running it virtually wasn't going to be fun!

So I used gparted to resize my main partition. Luckily I had over 100GB free so I was able to create a primary partition of 50GB for Windows 7. I booted off the install DVD and installed windows as you normally would, and now I have the option of booting into my earlier version of windows (XP) or 7. After installing most of the stuff I need day-to-day I've used about 10GB of disk space.

I've had to do some testing and application support on Vista, but I haven't used it for any length of time, so everything in 7 is new to me. So if I say "hey, Windows 7 has this cool new x" don't come back to me saying "Duh, that's not new, x was in Vista". ;)

Having said that, I think having to use Vista broke me in gently to some of the new concepts and made me more accepting than if they were brand new. For example, I don't know why my programs menu has to be limited to a tenth of the screen space. I much preferred the ever expanding sea of grey that you got on an old XP system. But I'm getting used to the new start menu, and I daresay I'll start using the program search in time. 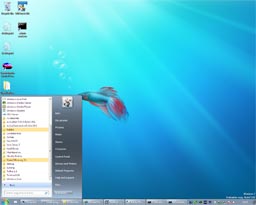 There's lots more to come on Windows 7, but from first impressions it's looking good. It's fast and responsive, and I haven't hit any brick walls yet during my usual work, although some things take a bit of Googling to see where/why things have moved! Hopefully I'll get a chance over the next while to do a few little posts. One thing I'll definitely do is a list of compatible programs & applications. So far only two haven't worked and they were both games!
Posted by Michael Hinds at 6:36 AM No comments:

Having missed out on the beta I was happy to see anyone can download the Windows 7 Release Candidate. It took about an hour and a half to install in Vmware, but that's not surprising since my XP is running like a dog these days, and because I only have 1GB of physical RAM I could only allow the VM 768MB (1GB is the minimum).

I've had a quick play, and it seems similar to Vista at first glance. I haven't seen the UAC yet, but I've only played with the new versions of Paint, Calc and Stickies, and messed with a few things in the control panel.

Networking isn't working. Not sure if this is a problem with Vmware or Windows 7. Hopefully I'll have a dual boot working so I can test it natively soon. Maybe it'll be a good thing if I don't get it working though... Those cunning Microsofties have given us the Ultimate version so if I get used to it I doubt I'll want to buy one of the lesser versions when the time comes!
Posted by Michael Hinds at 12:12 PM No comments: